In 2020, we witnessed firsthand the effects of climate change, as seen in the devastating wildfires that swept through parts of the world. In California alone, 8,100 wildfires ravaged the landscape, killing more than 30 people this year.

In areas of Australia, massive swaths of habitat were destroyed, killing more than 5,000 koalas and leading scientists to predict that the animals could be extinct by 2050 if the trend continues. According to reports, the Amazon rainforest in Brazil suffered the worst fires in a decade, and jaguars were found wandering and starving, their lungs black and paws burned to the bone.

Amid these losses, photographers have been on the frontlines, documenting these fires and sharing these stories with the world. From landscape photography to conservation photography, their work serves as an enduring reminder of the importance of protecting the environment and reevaluating our precarious relationship with the natural world. It’s more than a simple record; it’s a call to action.

Below, you’ll find 15 wildfire photographs from the 500px community that stopped us in our tracks. 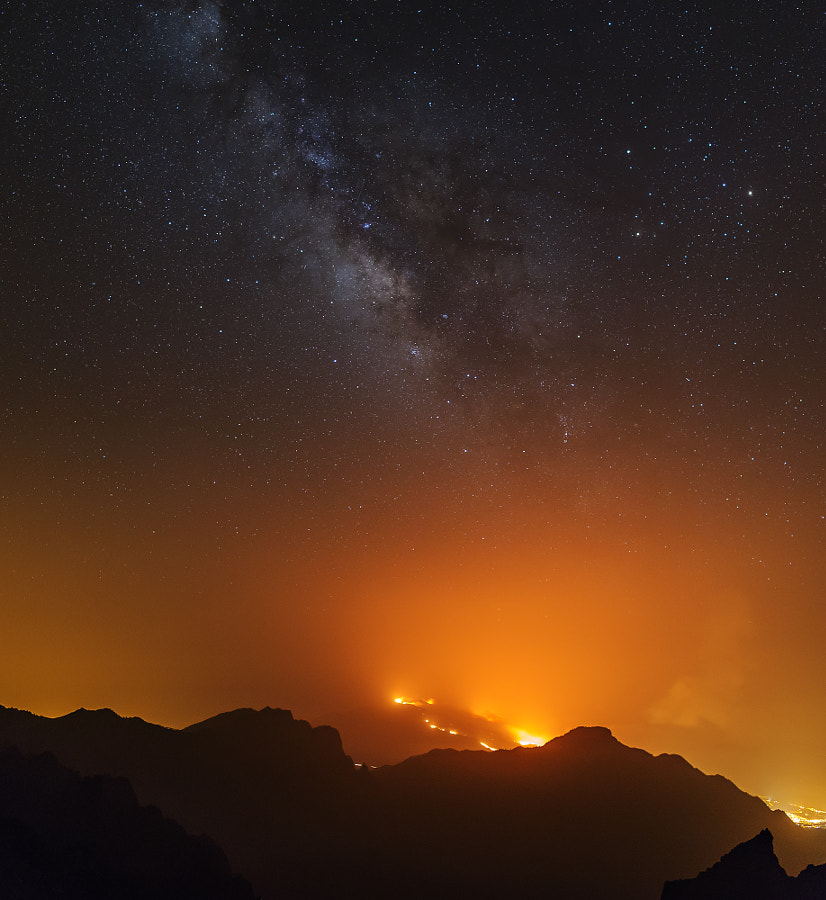 In 2016, a massive wildfire, believed to have been started accidentally by a man setting fire to toilet paper, ravaged almost 12,000 acres in the island of La Palma. 2,500 people had to evacuate, and a forest ranger, Francisco José Santana, was killed in the fire while working to put out the flames. 7% of the island was destroyed. Vitalis Vasylius captured this photo the year of the tragedy. 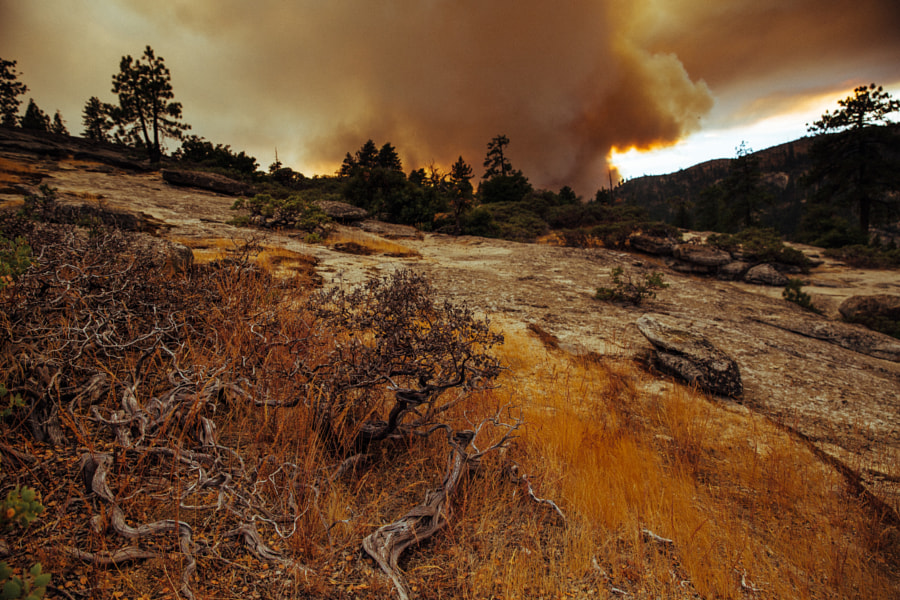 “Multiple fires have been gripping Yosemite National Park,” Ev Tchebotarev reported in July of 2014. “One fire started near El Portal on HWY 120, closing traffic in both directions, while CalFire helicopters tried to contain the fire.

“In Yosemite, the other side of the famous Tunnel View was on fire but luckily was contained by the end of the day Saturday, July 26. The weather is extremely hot and dry, increasing the danger and spread of wildfires. One huge fire was caused by the lightning strike on July 16 and continues to burn.”

If you plan to document wildfires, your safety and the safety of others, including firefighters and residents, will be your top priority and responsibility. You’ll need to invest in fire-resistant Nomex suits, boots, gloves, and helmets, as well as an N95 respirator.

Be careful about where you park your car, as it can’t block any emergency vehicles. Never go in without a detailed plan of escape, and keep your distance. Stay out of the way of firefighters while they work.

It doesn’t hurt to connect with an experienced wildfire photojournalist to get their tips as well. You might find there’s a group in your area that goes out together while reporting to have each other’s backs. Don’t try this kind of work alone; find a team to help. 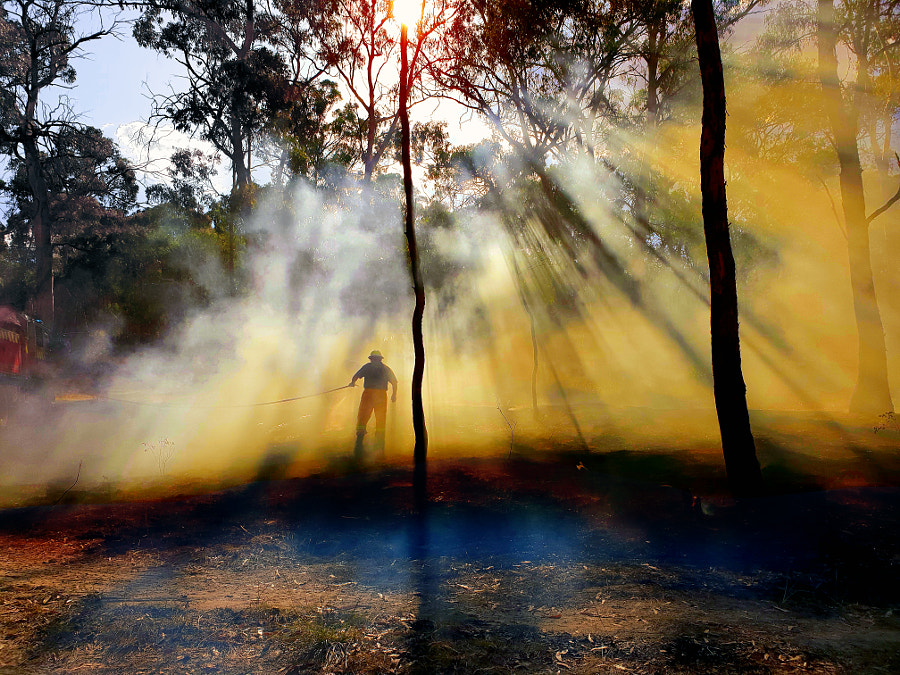 Glenn Kirk is a photographer, firefighter, EMT, and conservationist in Australia; he captured this picture two years ago during a Warrabah Bushfire, as the fire service fought the flames. It was one of many fires he’s documented throughout the continent’s landscapes, plateaus, national parks, and beyond.

Kevin Doty documented the Soberanes Fire in Big Sur in July of 2016. The fire was one of the most expensive in US history; after starting from an illegal campfire, it burned for three months, ravaging 132,127 acres, destroying more than 50 homes, and killing Robert Reagan, a bulldozer operator working in the area. At the time, California was heading into its fifth year of drought, with the Parks Service calling for emergency rules for water use. 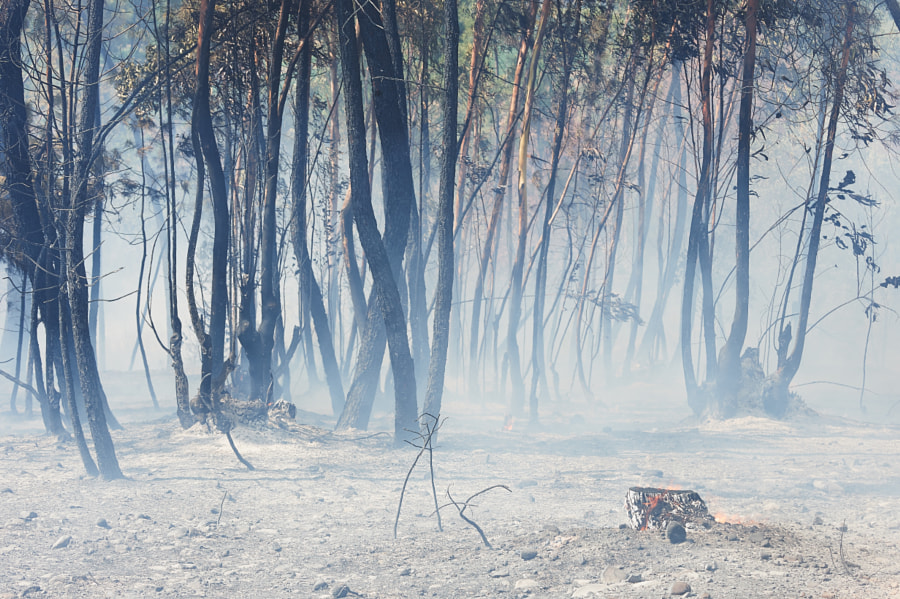 The photojournalist Rui Caria has covered multiple wildfires in Portugal, including this one in 2015. Two years later, in 2017, the country witnessed a devastating wildfire season; that time, the fires left 120 people dead and 500,000 hectares burned, ushing in a new era of “mega-fires” that rocked headlines around the world.

The laws surrounding the documentation of wildfires will vary based on your location, so touch base with the authorities to check what’s allowed and what isn’t. In California, the press can access emergency zones, but that’s not true everywhere. You might be able to get as close as the firefighters, or you might have to stay out. Of course, you can’t photograph on private property without permission. 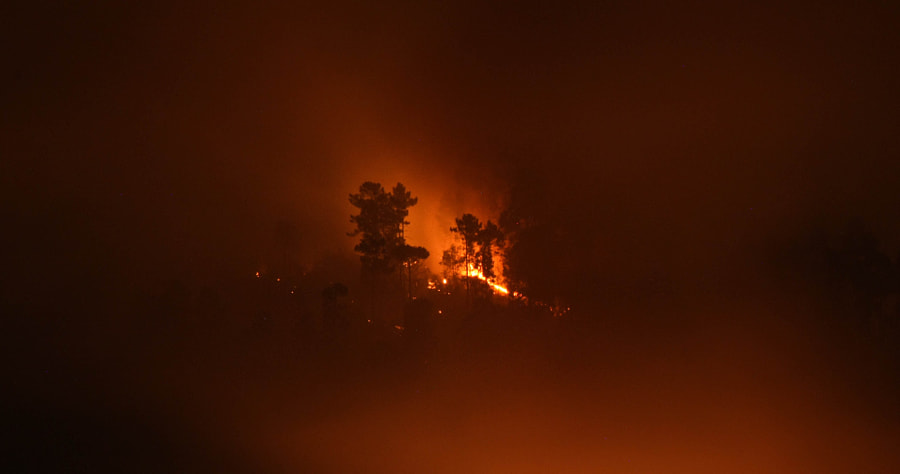 Also in Portugal, João Pedro Dias witnessed a fire in Travanca during the summer of 2018. This year, 2020, youth activists from Portugal made history by filing the first climate change case at the European court of human rights; they’re demanding countries cut emissions to prevent more forest fires like those they saw in 2017. 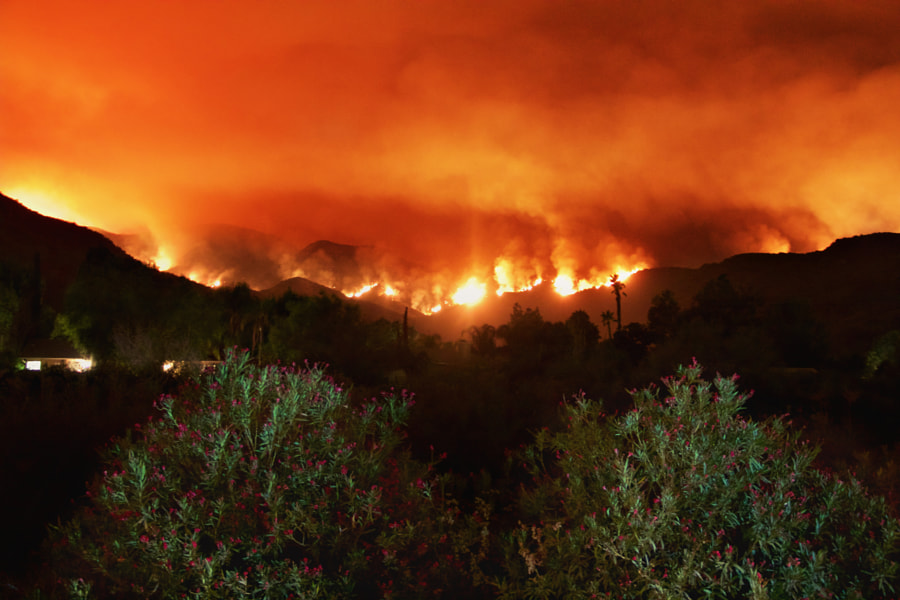 The Holy Fire of 2018 was one of dozens of wildfires across the state of California that year, brought on by drought, home construction, and warmer temperatures believed to have been caused by climate change. Members of the public witnessed 100-foot walls of flames. This is one of several images the photographer Anvilhead captured as the fire raged; it was created at Leach Canyon. 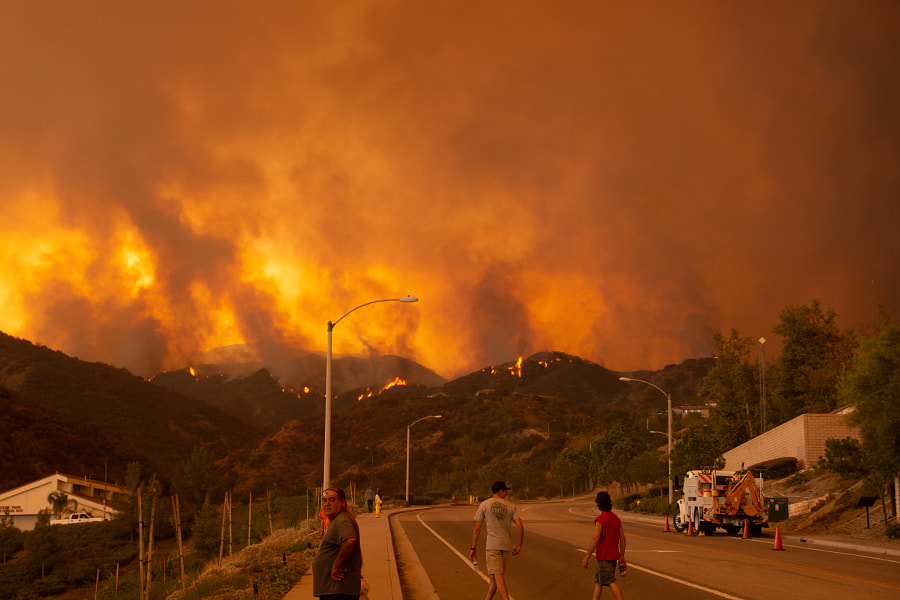 “These photos were taken in the McVickers neighborhood of the Holy Fire,” the photographer Patrick Burke wrote that same year. “I truly hope all of the firefighters fighting this fight know how much they are appreciated. I’ve never been so close to so much destruction while watching fearless men and women not giving a damn other than to do their jobs.”

Tip #3: Get your training

Before heading out into the field, register for fire safety courses and training in your area. You’ll likely take part in online training as well as field training. Your local department should have information on where you can start; many photojournalists ultimately get firefighter level training when working with active fires.

Beyond fire safety training, consider enrolling in a workshop for journalists covering crises and hostile environments. Not only will your training keep you safe, but it’ll also help you better predict and understand how the fires will move.

Pedro Bessa moved to Nova Friburgo, Brazil, with his parents when he was just four years old, and he’s called it home ever since. He saw this wildfire unfold in 2015, blazing against the backdrop of his country’s forest and mountains. 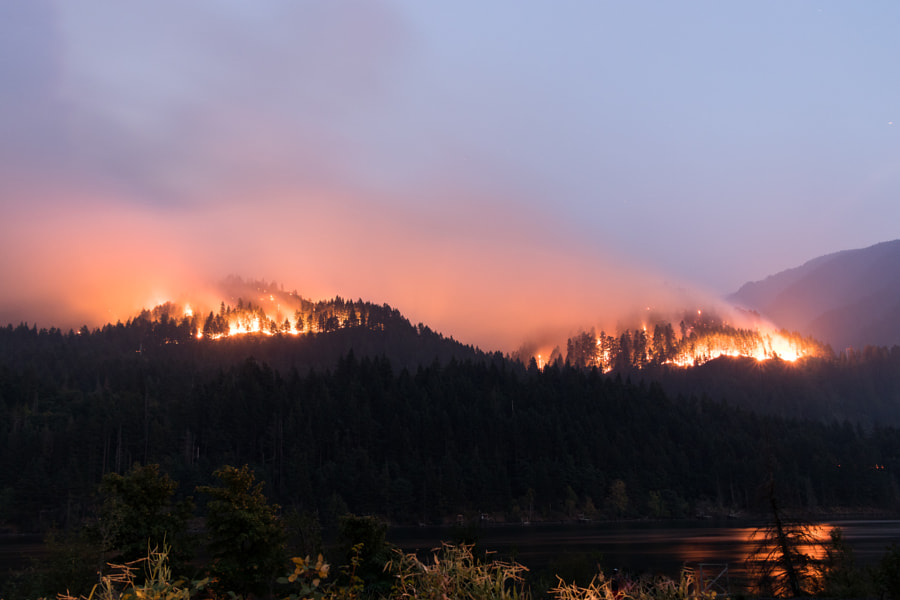 The Eagle Creek Fire was started in 2017 after a 15-year-old threw fireworks into a canyon; it burned 50,000 acres in the Columbia river gorge. The photographer Jason Clarke, who is based in Portland, captured this view of the flames over Eagle Creek and Cascade Locks in Oregon. 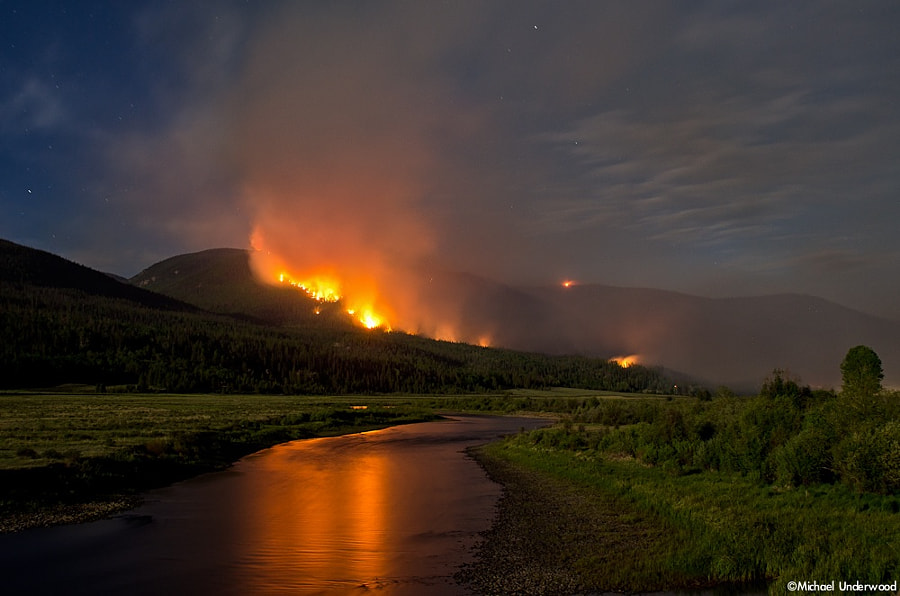 “The Papoose Fire, part of the West Complex Fire, was a wildfire in the Rio Grande Reservoir area of Hinsdale and Mineral County in June-July 2013,” the nature, landscape, and wildlife photographer Michael Underwood remembers. As a Colorado local, this fire hit close to home for Michael; he took this picture around 9:30 pm on Sunday night, June 23, as the blaze reflected in the Rio Grande River. “The Meadow fire erupted September 7, 2014, from smoldering embers of recent lightning strikes, in the Little Yosemite Valley area adjacent to Half Dome, near the Merced River,” the photographer Peter B. James wrote at the time. “It eventually scorched nearly 5,000 acres of forest, closing some of Yosemite’s most popular trails for a stretch. While far smaller than 2013’s massive Rim Fire, the location of the Meadow Fire in the heart of the park made it a spectacle that few who witnessed it will forget.”

The renowned wildfire photojournalist Stuart Palley donates proceeds from his fine art work back to the cause by supporting the Eric Marsh Foundation for Wildland Firefighters. In the end, this kind of work is about making a difference, so help out your local community in whatever way you can. When you share your photos, tell the stories behind your images and show people what they can do to help, whether it’s donating or volunteering. 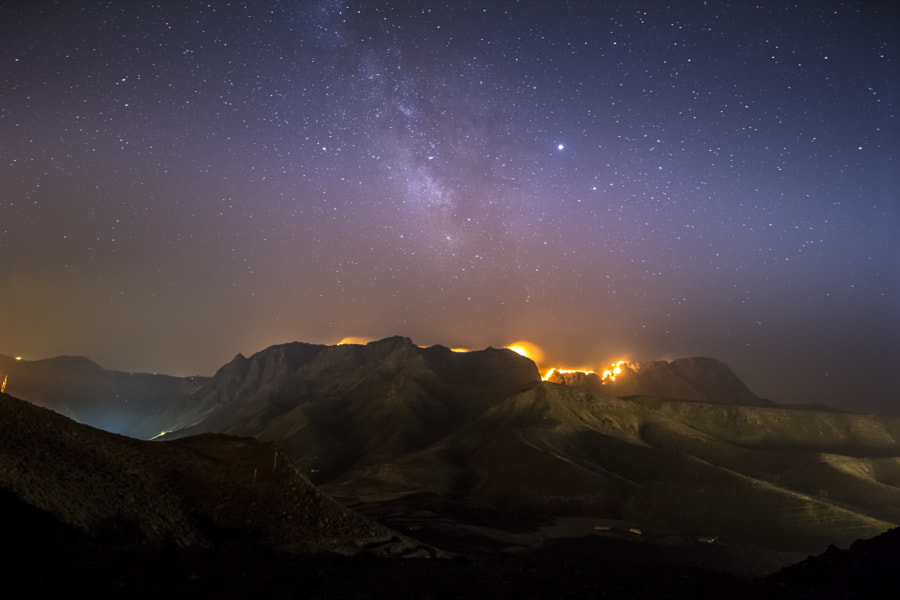 In Gran Canaria, 9,000 people were forced to flee due to fires in August of 2019. With flames as high as 50 meters, the fire spread to Tamadaba natural park, home of invaluable pine forests; experts called it “an unprecedented environmental tragedy.” Carmelo Ruiz captured this long exposure as the fire raged beneath the stars. 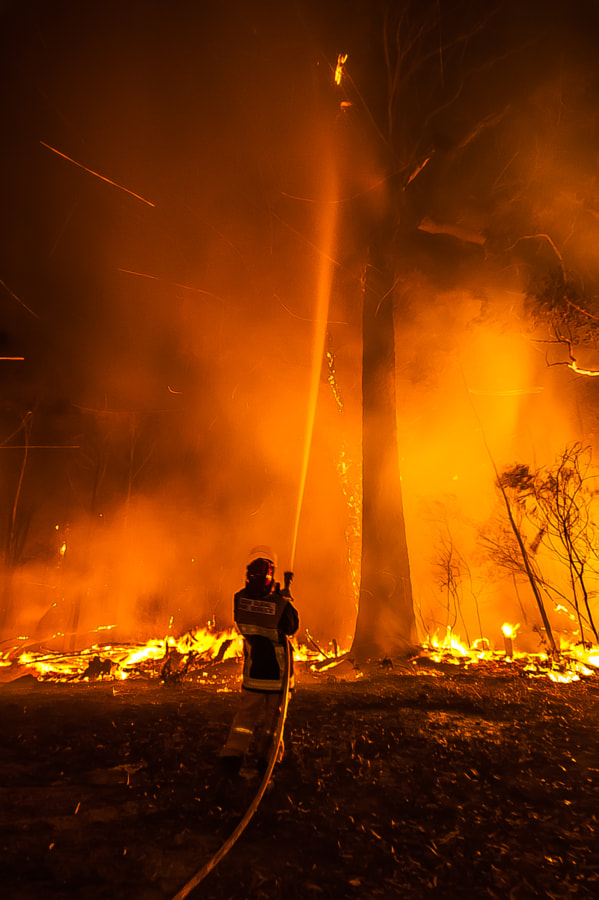 “A firefighter works under hot and windy conditions to extinguish the top of a tree during large scale fires in New South Wales, Australia,” the photographer Dean Symons wrote six years ago while covering the fires. “Burning trees such as this can aid in the spread of a wildfire in the coming days and must be extinguished.” In 2020, the world watched as Australia burned amid the bushfire crisis, which scientists linked to climate change. 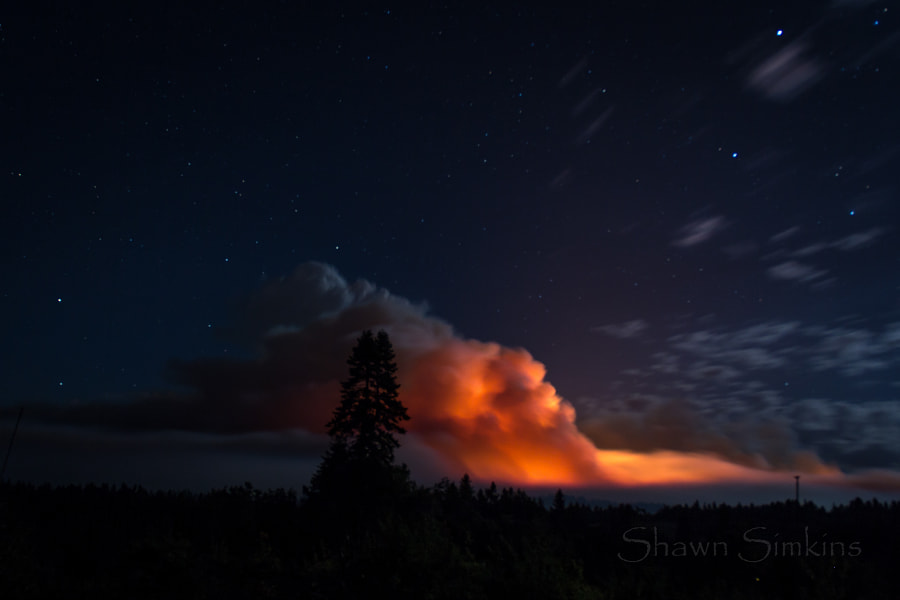 “In September, the King Fire in Pollock Pines, California burned almost 100,000 acres of our beautiful backyard,” Shawn Simkins reflected in 2014 after documenting this scene. “Night left a quiet stillness in the atmosphere and moments of flare-ups lit up the night sky, revealing the ominous smoke plume.”

The post Extraordinary photos of wildfires appeared first on 500px.

These 15 photographers have been on the frontlines of wildfires, documenting them and sharing the stories of the fires with the world.
The post Extraordinary photos of wildfires appeared first on 500px.

The ultimate guide to minimalist photography500px

Focal Length Feud: 28mm vs 35mm for Telling a story – by David Babaian and Simon King