In early November, people across Mexico, South America, the United States, and beyond will remember their loved ones as part of Día de los Muertos, or Day of the Dead. It’s a holiday rich with symbols, from the calaveras de azúcar (sugar skulls), made as offerings to those who have died and gifts to those still living, to La Calavera Catrina, the finely-dressed skeleton who protects those who have passed on. 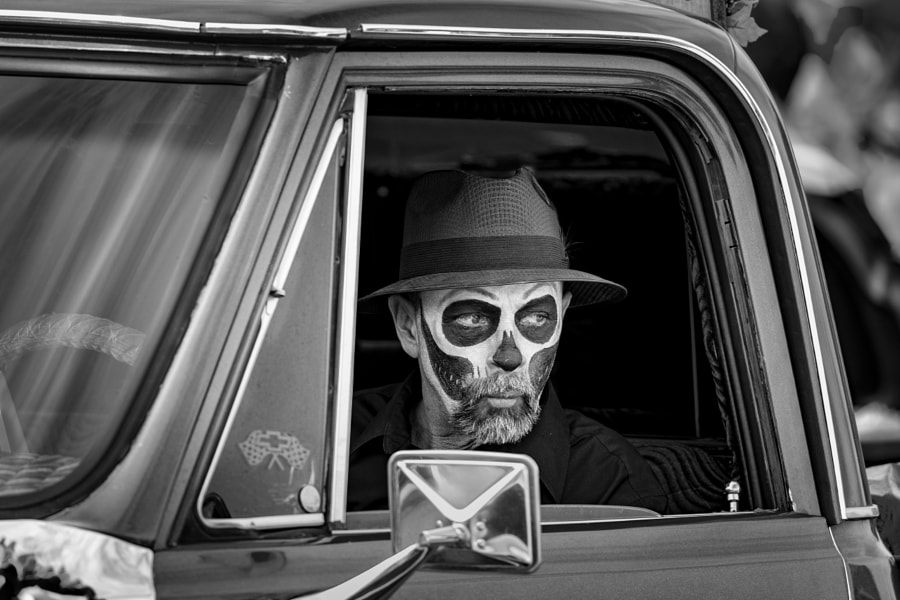 As vendors roll out bunches of marigolds, their signature fragrance will fill the streets. People will dress as the Catrina, donning makeup and finery. At home and at school, people will build altars, ofrenda, to honor the deceased, while many will visit cemeteries, adorning the tombs of those closest to them with flowers.

Most will light candles and display photographs as they await the brief return of the souls of the dead to the realm of the living. They might leave offerings of favorite foods or toys for children. For these two days, death will be associated not with sadness or fear but with celebration, in keeping with the beliefs of the Aztec and other Nahua people, who saw death as a natural part of life rather than something to be mourned.

From traditional sugar skull and papel picado (pierced paper) artisans to painters like Diego Rivera, artists have always played a role in Día de los Muertos, and photographers are no exception. Throughout the decades, they’ve chronicled the evolution of this UNESCO-recognized holiday, while honoring its storied past.

Today, a search for “Día de los Muertos” on 500px yields more than 4,126 images from across the globe. Here are some of our favorite photos from the community. 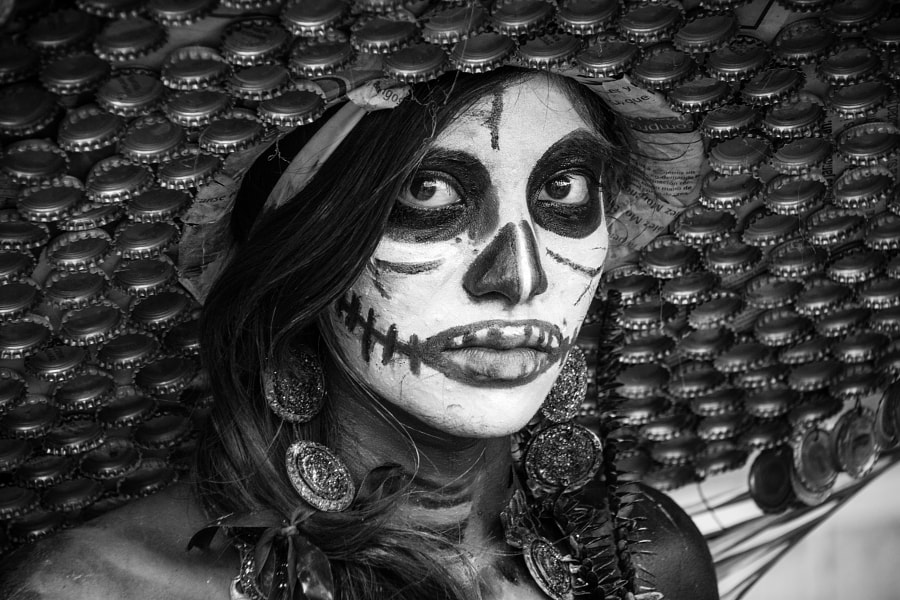 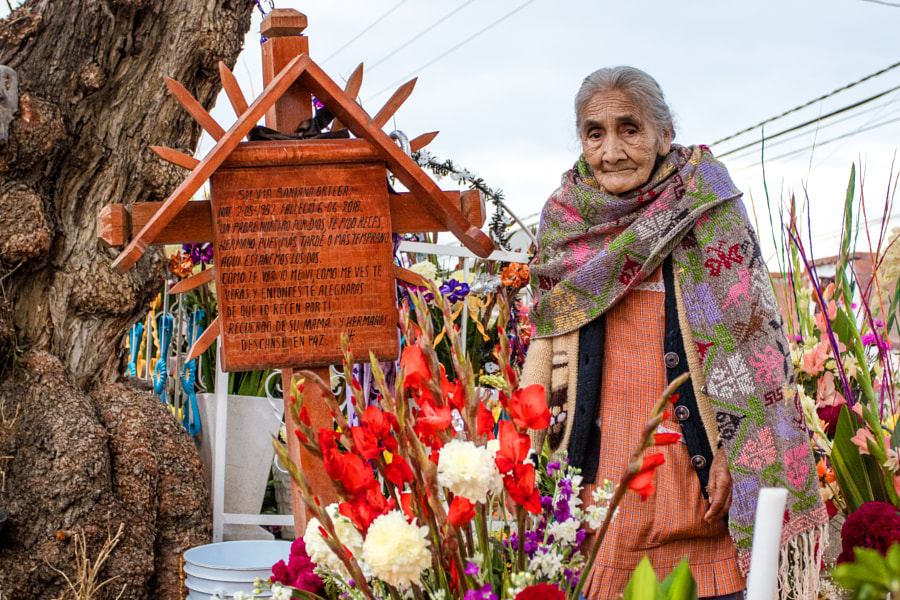 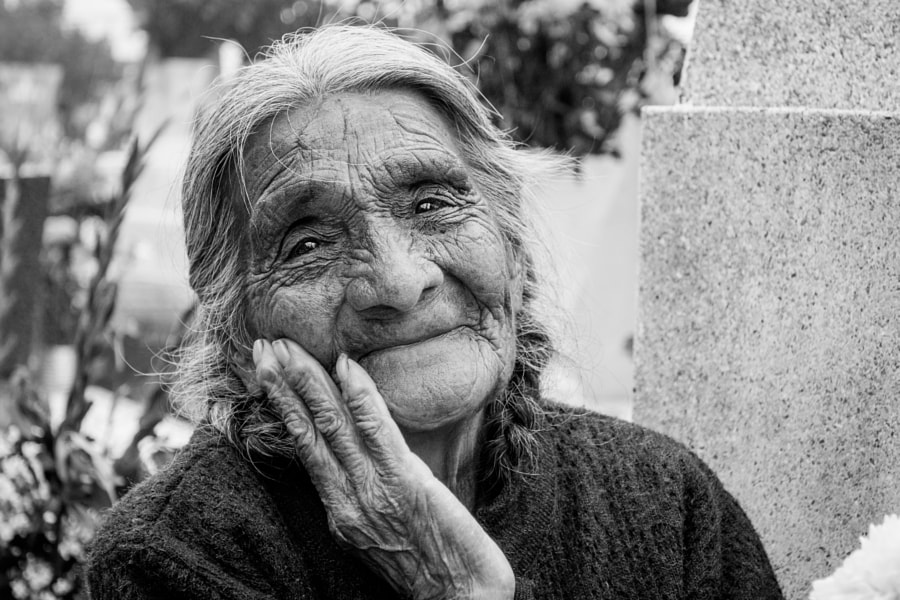 In addition to studio photos around the theme of Día de los Muertos, Isaac Lopez Mesa has created intimate street portraits. Mixquic, where he captured this moment, is home to some of the most important Day of the Dead celebrations in the world, renowned for its church graveyard, which draws thousands of visitors annually. Also in Mixquic, Rodrigo Cuevas Gispert captured this fleeting moment, as a merchant offered flowers for people to decorate their altars as well as their loved one’s tombs. Later, Rodrigo encountered a man and a woman preparing the tombs of loved ones in anticipation of Día de los Muertos, awash in colorful flowers. 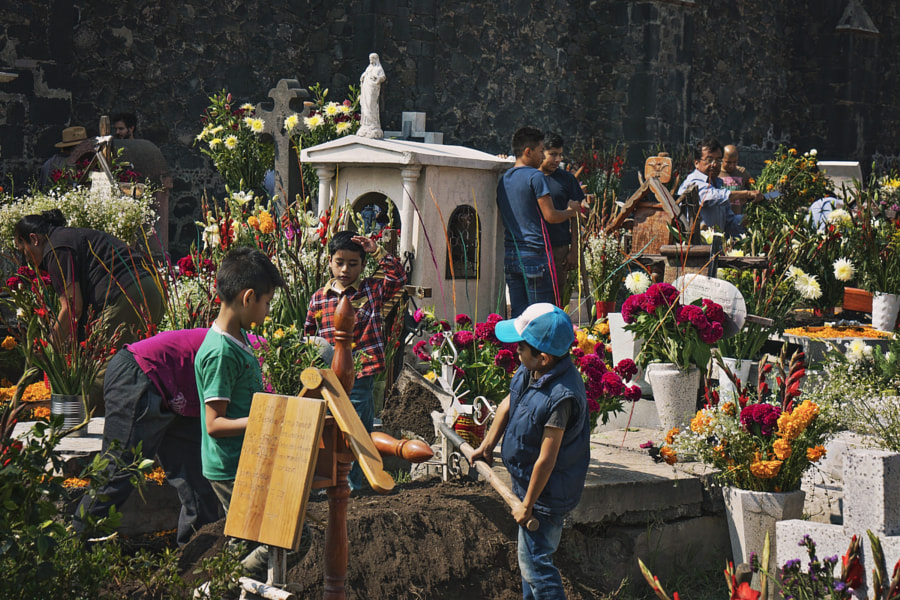 “Since childhood, children learn the traditions that their fathers learn[ed before them],” Rodrigo writes. “There are few places in the world in which a child feels so calm as being in a graveyard, [among] traditions that pass from generation to generation.”

Photo Tip: Do your research The colors and flavors of the Day of the Dead are known around the world, and in recent years, interest in the holiday has soared. If you plan to document the celebrations, learn about the history of the area you’re visiting. What traditions make this place and community unique? If you can connect with people who live there, even better. The more you understand about the meaning behind the holiday, and its significance in the neighborhood you’re photographing, the more compelling your images will be. 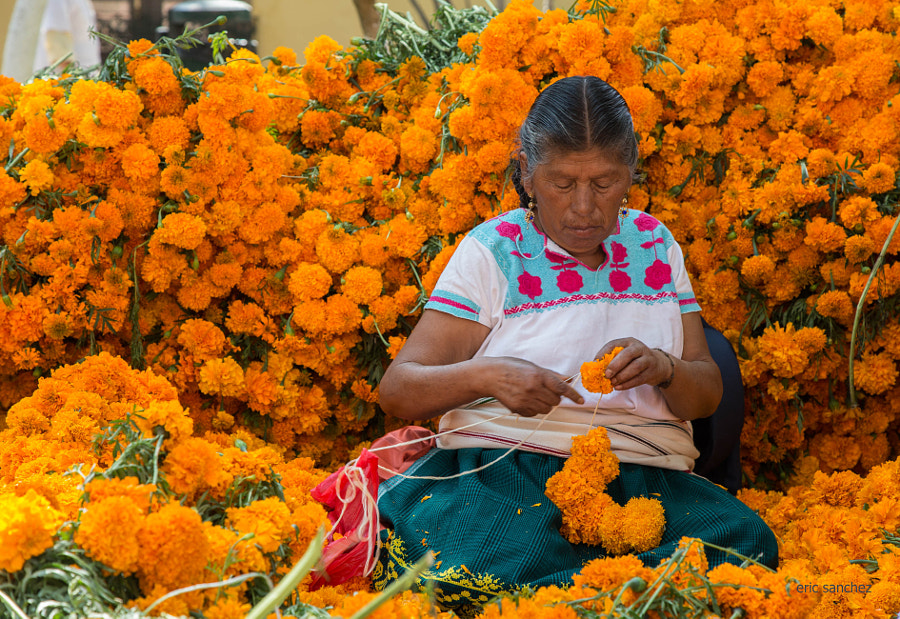 In this photo by Eric Sánchez, a woman from Santa Fé de la Laguna works with cempasuchil flowers, or sweet-scented Mexican marigolds, in preparation for the Day of the Dead. Fernando Díaz captured this quiet moment as a man sat on the grave of his wife, framed by cempasuchil. Mexican marigolds, sometimes called “flor de muerto” (flowers of the dead), are placed on altars to attract the souls of departed loved ones. 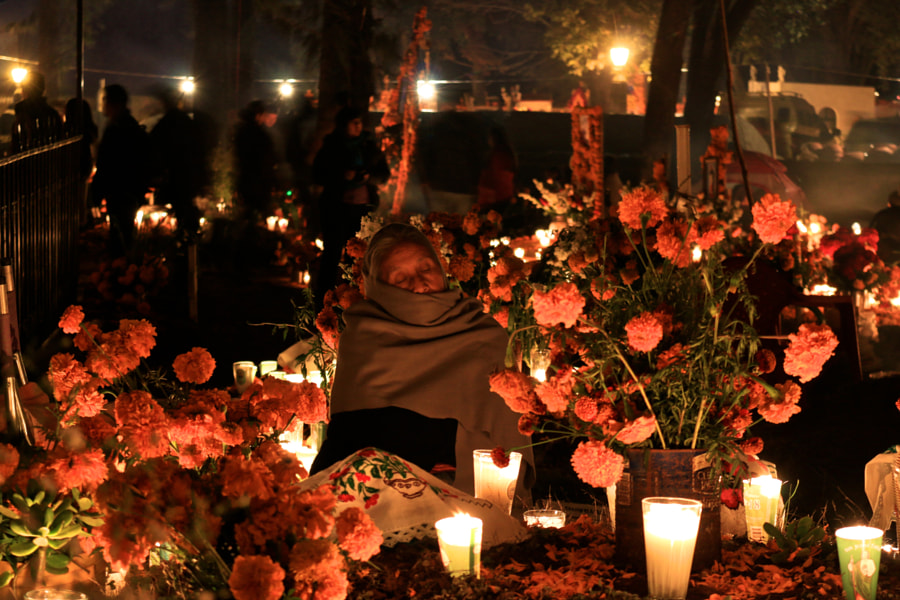 In another photo by Fernando, a woman watches over the grave of her husband—again, surrounded by cempasuchil—staying still as passersby blur into the background. 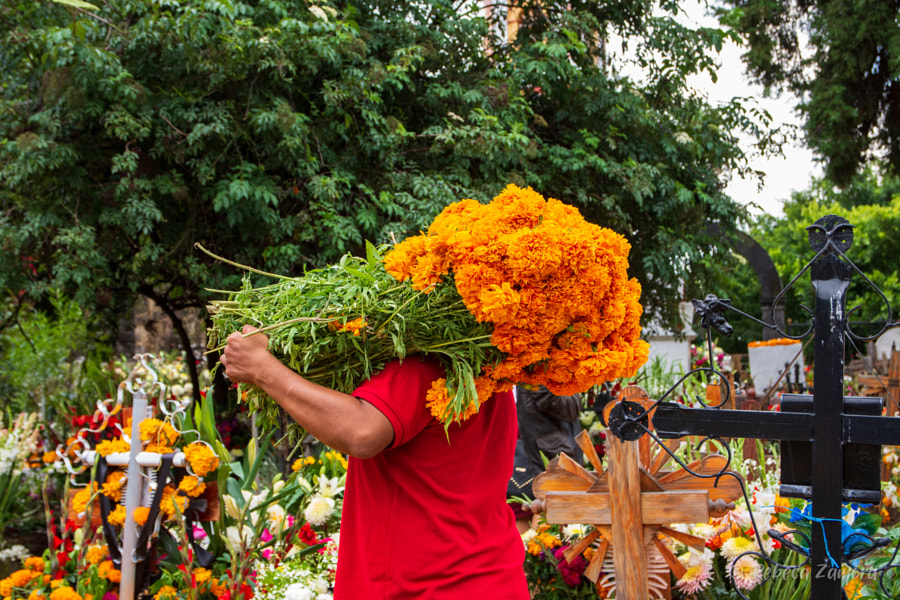 Rebeca Zamora, a photographer based in Costa Rica, captured this “decisive moment” during her visit to Tochimilco during the Day of the Dead. 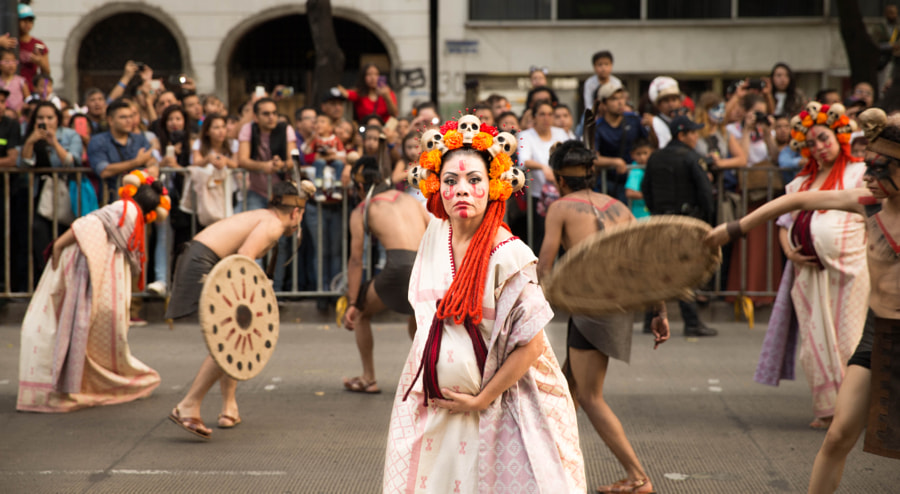 Gustavo Márquez, who calls Día de los Muertos “one of the most beautiful days in Mexico City,” celebrates the colors of his city, where he’s lived since moving to Mexico from Venezuela. 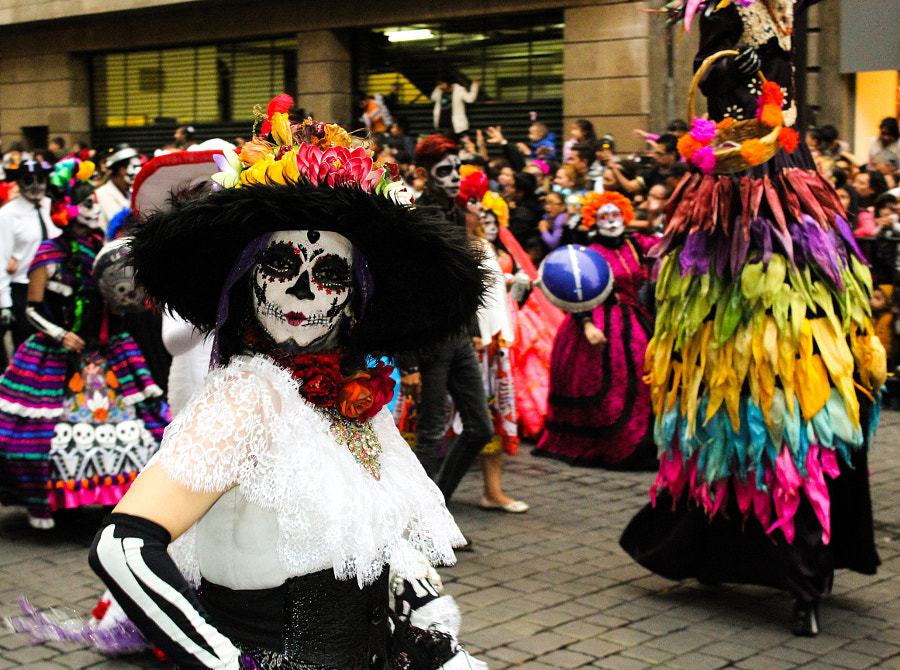 Also in Mexico City, Lianfranco Pinillo makes eye contact with a woman dressed as the Catrina during a parade. The hat is an important part of these ensembles, as this feature of La Catrina’s wardrobe was popularized in a 1910-1913 etching by the artist José Guadalupe Posada and, later, a mural by Diego Rivera. 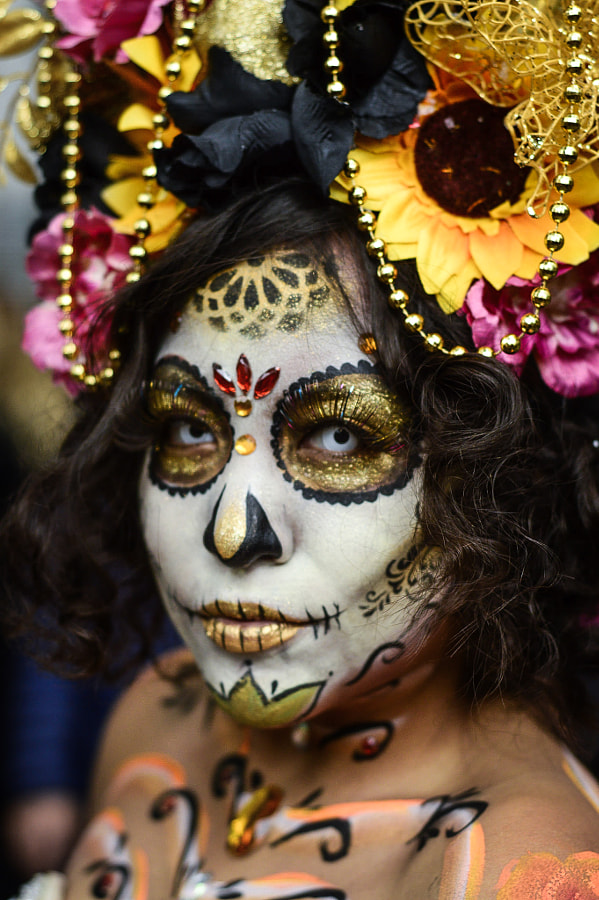 Leví Nava, who is based in Mexico City as well, created this portrait while documenting the “annual mega-procession of Catrinas” that transforms the city’s streets. 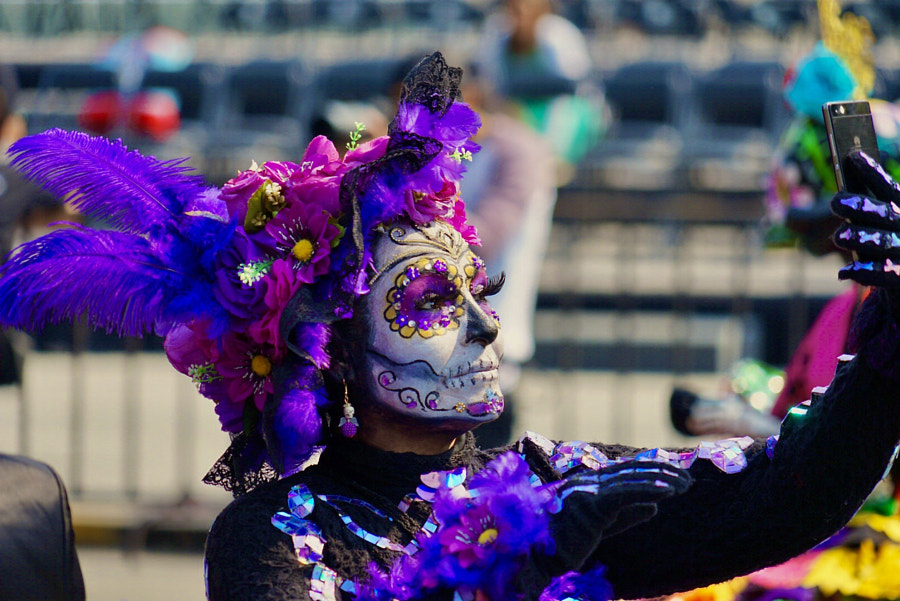 In this picture by Rafa Grimaldo, new and old traditions meld together, as La Catrina takes a “selfie.”

Photo Tip: Start locally Some cities and villages are famous for their Day of the Dead celebrations, attracting thousands of visitors each year, but there are also lesser-known spots worth exploring. If you’re based in Mexico or even parts of the United States, start by documenting those close to where you live; that way, you can return several times and get to know the community, strengthening your connection to the people and the place. As an insider, you’ll be able to create images that stand out from the typical tourist photo. 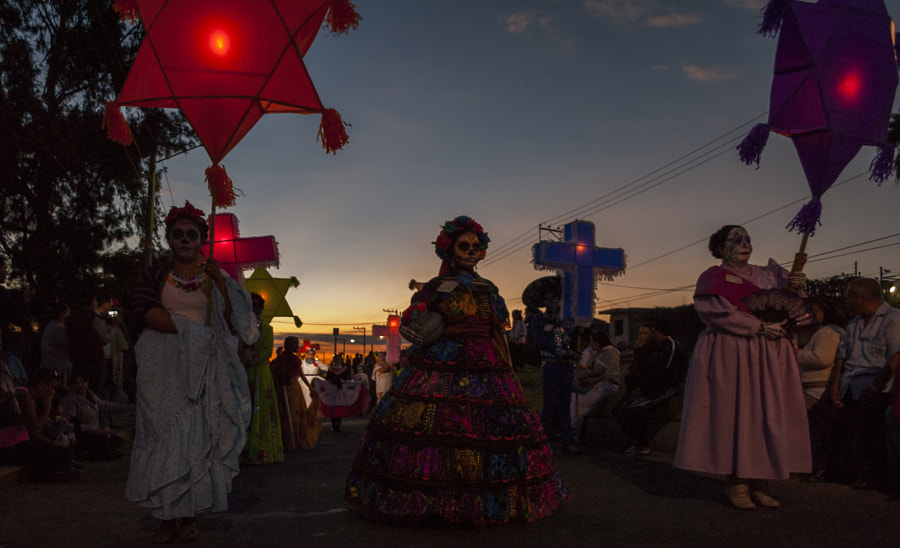 In Celaya, Guanajuato, Rogelio Sánchez documented this Walk of the Luminaries at sunset, as the souls of the dead were guided to the cemetery following Día de los Muertos. 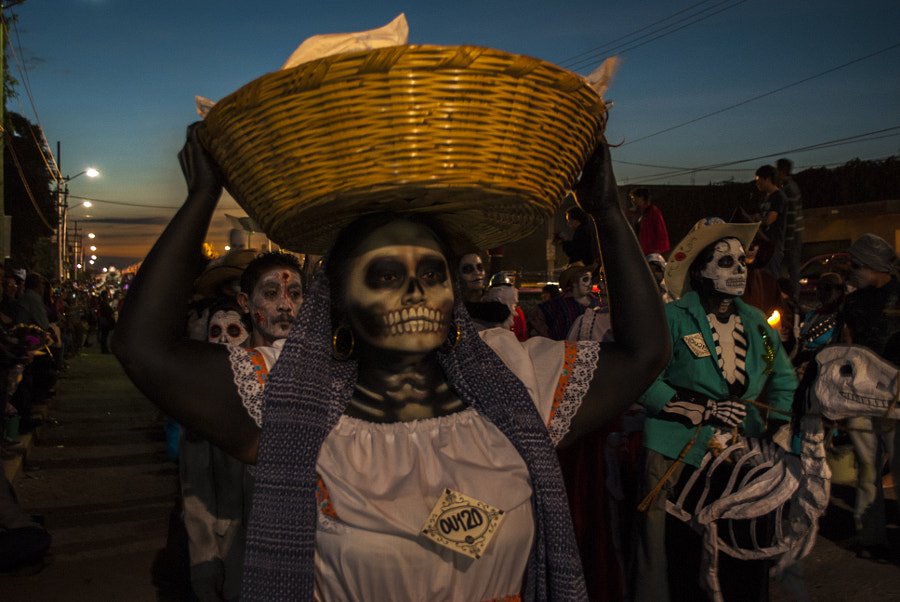 Also in Celaya, Rogelio highlighted “bread of the dead,” or pan de muerto, a soft and sweet bread offered to the souls of loved ones. Photo Tip: Seek permission If you’re in Mexico during the Day of the Dead, you won’t be short on subjects to photograph, from the artisan-crafted sugar skulls to the fancy clothing, inspired by the Catrina. Whenever possible, ask consent to take photos.

Most people, including artists selling their creations and people showing off their makeup, will be glad to sit for a photo. When you ask permission, you might get more intimate pictures as well. Perhaps people will also be willing to share the stories behind their artwork, adding new layers of meaning to your images. 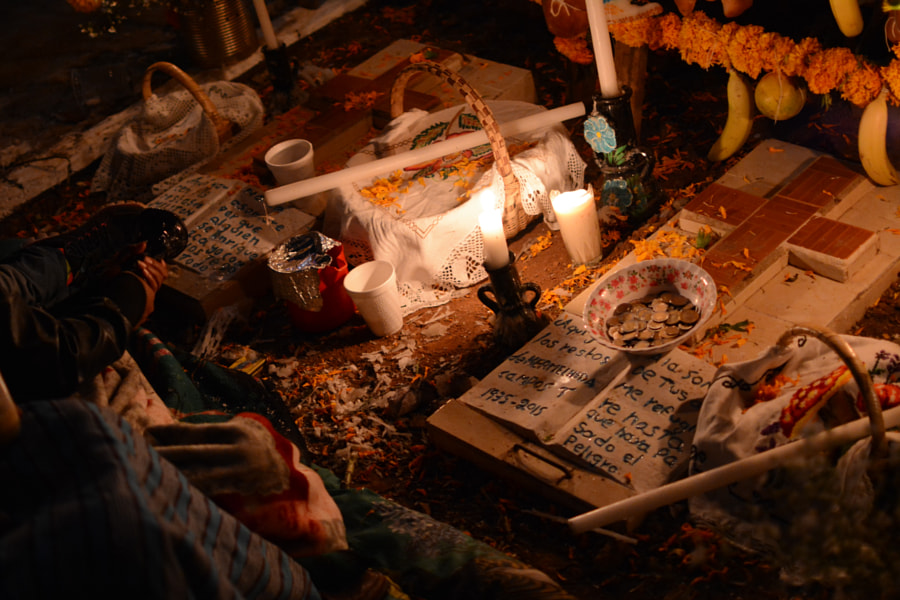 Pátzcuaro is known around the world for its Day of the Dead celebrations, including the Indigenous tradition of traveling to the island of Janitzio for a nightlong vigil. On this evening, you can see candle-lit boats making the journey to the island. Vicente Gallardo made this picture while visiting Pátzcuaro on November 2, 2017. 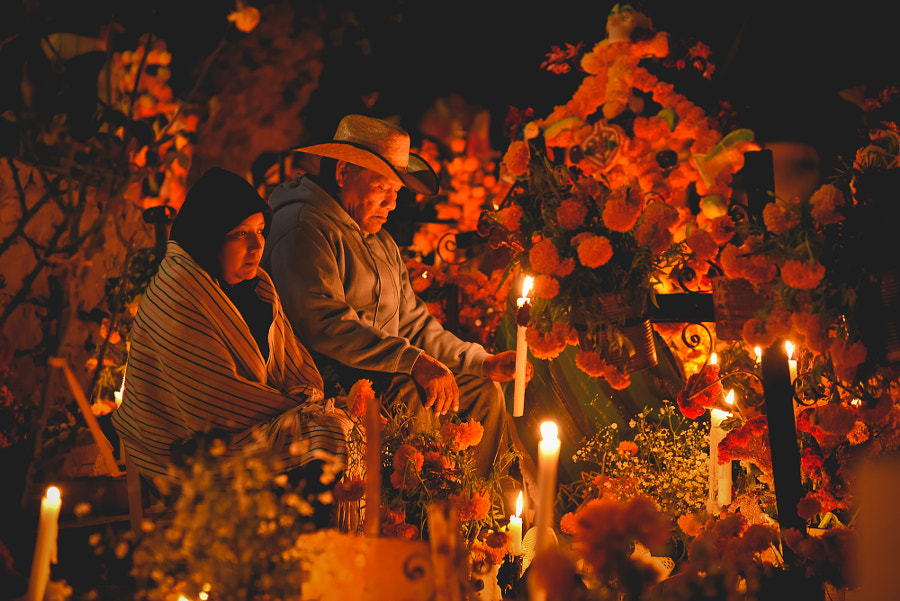 Roberto Puga, who is based in Guadalajara, also traveled to Janitzio to document the traditional Day of the Dead. “During the Day of the Dead celebration in Pátzcuaro, the fishermen of Janitzio Island perform a display of their usual fishing techniques,” the photographer Diede van Lamoen writes. “Lit by candle light, it is a magical scene.” 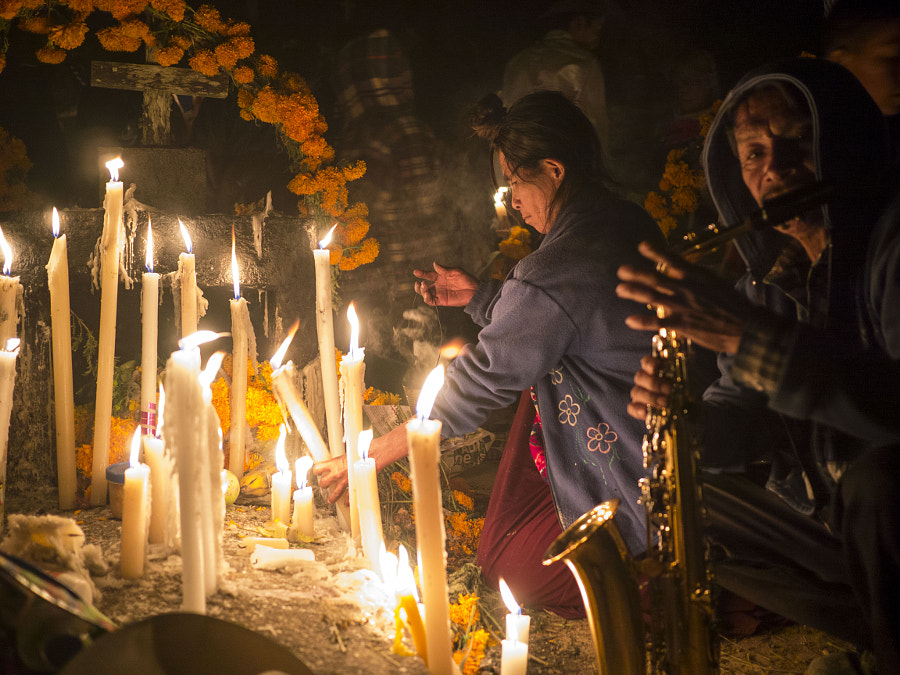 During the Day of the Dead celebrations, families often feast, dance, and play music with departed relatives. Cristian Zea photographed this moment in Chilpancingo, Mexico. 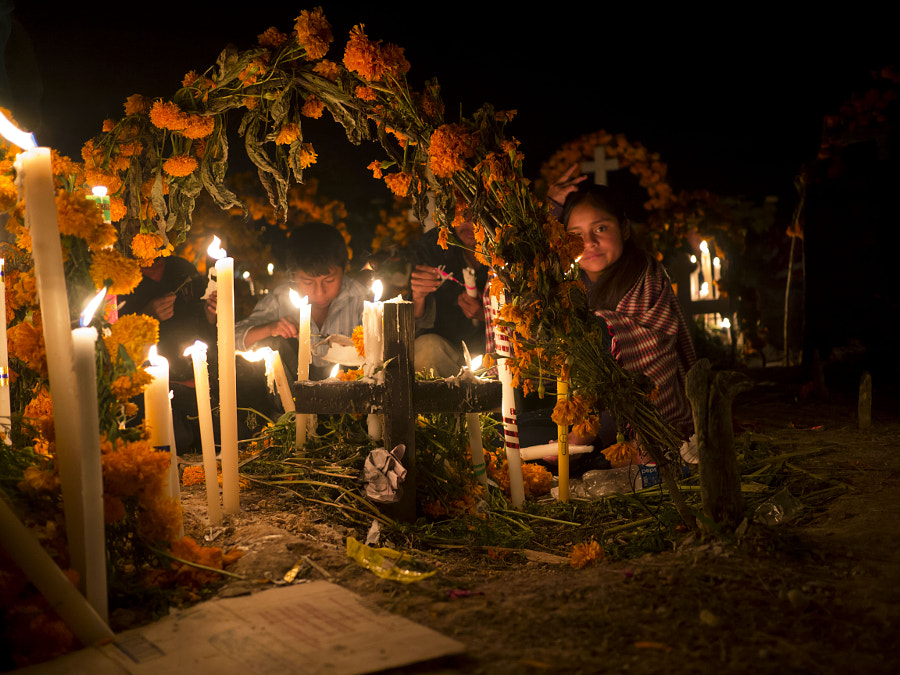 On that same evening, Cristian created this portrait, where everything came together: the marigolds, the candles, and the candle-lit faces. Salt is often used in ofrendas, meant to purify and quench the thirst of returning souls. This ofrenda, photographed by Jesús García, also has a marigold cross with incense at the center to guide the souls to the altar.

Photo Tip: Practice shooting in low light On the Day of the Dead, so much happens after dark, so get used to working in less-than-ideal lighting conditions. You can always bump up your ISO, use a tripod, and bring extra lights to the location, but—unless you’re working in the studio—it’s rare that you’ll be able to control the light beyond that. Get into the habit of adjusting your settings on the fly and dealing with difficult light; it’ll save you any disappointment when the day finally comes. 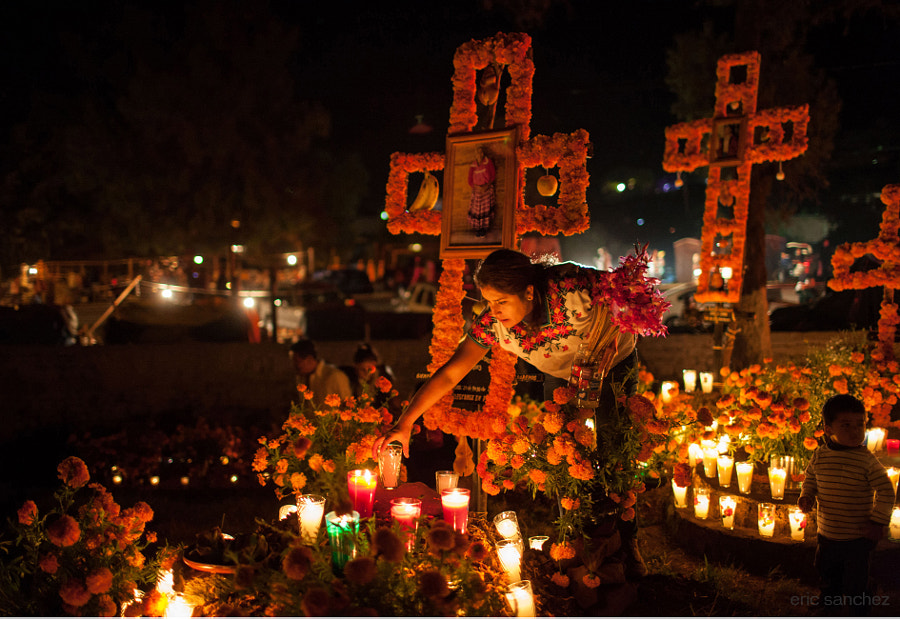 Although Día de los Muertos might predate the invention of the camera by thousands of years, photographs now play an important part in the creation of alters, as they are believed to help attract the souls as they cross over. Eric Sánchez created this picture in Tzintzuntzan, Mexico. A young boy from Toluca welcomes the souls of the departed in a moment immortalized by Melvin Molina, who titles this photo ‘¿Estás ahí?’ or ‘Are you there?’

Día de los Muertos might have its roots in ancient times, but it wasn’t until 2008 that it was recognized by UNESCO as part of their Intangible Cultural Heritage of Humanity lists. In 2017, Walt Disney Studios and Pixar brought the holiday to the big screen in Coco, while cities around the United States have begun to celebrate and honor the Day of the Dead in their communities. As old traditions continue to flourish—and new ones continue to emerge—we expect to see even more beautiful, colorful, and moving photographs of this holiday.

Looking for more? Check out this striking collection of 39 sugar skull portraits from 500px.

The post Stunning pictures of Day of the Dead on 500px appeared first on 500px.

From sugar skull artisans to painters like Diego Rivera, artists have always played a role in Día de los Muertos, and photographers are no exception.
The post Stunning pictures of Day of the Dead on 500px appeared first on 500px.

The Analogue Studio Polaroid conversion kit for the Mamiya RB67